During this dark of the moon, as we approach Saturday’s new moon, the Hindu festival of Maha Shivaratri gives us all an invitation to contemplate and honor Shiva – the deific being who represents the ground of consciousness, pure potential, and ultimately that from which all things manifest and into which all things dissolve. 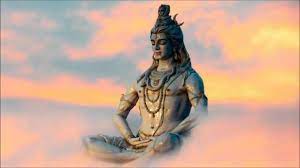 Shakti Malan, the Founder of the Shakti Shiva Academy, would often refer to this potent Masculine Principle as the “Deep Masculine,” an archetypal energy that represents a shift in consciousness from self-improvement (becoming better at being a better human) to Awareness, what seekers might call Self-Realization & Awakening.

The Deep Masculine is He who Rests in Pure Awareness

According to Maha Shivaratri teachings, it is on this day that Shiva did the Tandava – the holy dance of creation, performed with great energy and strength, that generates destruction/dissolution, revelation, and concealment as well as the sustaining energies of life. The Maha Shivaratri is said to be the day that Shiva and Shakti (the primordial cosmic energy that represents the potent Feminine Principle) merged, or that Shakti manifested out of this ground of being on Mount Kailash. In a lot of the Tantric texts, and especially modern Tantra teachings, Shiva and Shakti are described in such a way that they are made to sound like two distinct beings when, in essence, they are entirely one and the same, inseparable. Shakti is the creative energy of this infinite potential energy that is called Shiva, which can not dance (exist) without Shakti, which can not create without Shiva, and so forth and so on.

We all have these potent, dynamic, dancing energies actively interplaying inside of us, inseparably relating in infinite ways, comprising the ALL, the Totality of the essence of life.

We are all this ALL, this Totality. 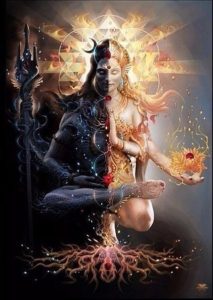 This is A LOT to contemplate.

As we enter into this season of sacred dances and cyclical equinoxes, take some time today to CONTEMPLATE your Totality – your Shiva and Shakti dancing inside of and as you.

Ask yourself – again and again – the question posed by Indian Hindu sage and jivanmukta (liberated being)Ramana Maharshi – Who am I?  In doing so you will discover that you are not your body, your personality, your story, your aspirations, your possessions, your accomplishments, your sexuality, your gendered identity.  You are none of it.

Allow a gradual stripping of identifications to happen until you finally come to stand naked and know yourself as absolutely none of this, though you get to touch and taste it all.

The reason Shiva is celebrated during Maha Shivaratri is so that we all take a conscious moment to contemplate the meaning of Shiva (or the Yang or the Divine Masculine or whatever word you might relate to best) in our lives. That we recognize that we too are the space within which every form arises, every form dissolves, and yet ultimately that space itself has no form.

That’s a lot to contemplate!