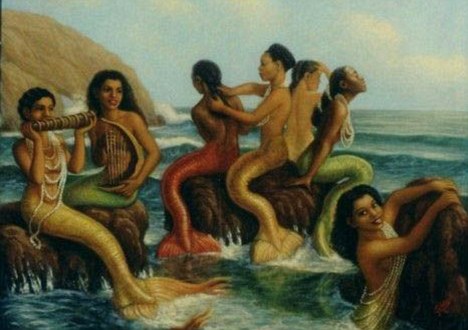 There are Mermaids in Africa 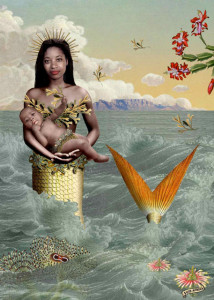 In popular media, mermaids are depicted as Barbie-like Disney characters that evoke in us a whimsical imagination of a certain quality of the feminine. I want to tell you today about the Mermaids of Africa – and invite your imagination to go to entirely new places.

Mermaids are well known in African culture – more than known, they are revered, and feared. In Southern Africa, they are called the Mondao. The Mondao is a water spirit in the shape of a snake that lives in water bodies. This shake has tremendous power, and she is said to be in charge of money and abundance. Years ago, I visited rural Zimbabwe where the villagers would not dare take any water from the local river before praying to the water spirit. In the tradition of African Shamanism, the Mondao is one of the non-familiar ancestral spirits that Sangomas (African shamans) may need to learn to work with. I was in a room once with a woman who had the calling to work with the Mondao but hadn’t been initiated into it. When the Mondao came and possessed her, her body was being flung around with a force so intense that it took four of us to hold her down.

A Sangoma told me, in response to my own initiatory process, that the Mondao had actually traveled down to Africa via the Nile from the north where it is known as Kundalini – the coiled-up snake symbolizing awakened sexual energy or vital life force.

Back down in Southern Africa, if you go into the Little Karoo (a semi-desert area between 100 and 200km away from the ocean), you will find cave paintings of mermaids. If you walk in the dry riverbeds, you may be lucky enough to find fossils of ocean creatures. A long time ago, all of this land was covered in ocean – and the memory of the mermaids remains here.

In another arid part of South Africa known as Namaqualand, the locals have a firm belief in and dread of mermaids and mermen. I have overheard some of the Nama grandmothers tell each other with total conviction how one member of their community went down to the river and saw there a fair lady. When he made eye contact with her, her eyes started to flash red, and she developed the tail of a fish. He ran home as fast as he could.

These tales of African mermaids express something of the power that is inherent in the mermaid archetype – a very different understanding of these beings than the Disney version gives us.

But what are Mermaids in essence? They are the coming together of human and aquatic form. They speak to the memory in the human species of a distant time when we were half ocean based ourselves. Over the centuries, we have forgotten or watery origins and have become attached to being land creatures. The cost of our forgetting of the water is evident: We have lost touch with an inherent fluidity that enables us to be profoundly present in the moment and responsive to now. In stead, we have become over-focused on solidifying our relationship with matter.

In forgetting to pay reverence to our inner mermaid/merman – have we also lost the pathway to true abundance, which requires of us to surrender to life the way a river surrenders to the ocean? Have we become so fixated on our human form that we seriously believe other creatures, such as dolphins, are inferior to us, even though they use significantly more of their brain capacity? Have we, in the name of science, reduced our bodies or organs, bones and blood and forgotten Kundalini, the vital life force that animates our bodies and that is an expression of consciousness?

We are truly magical creatures, and the myth of the Mermaid is a reminder to us that the doors to fluid Life are still open. Want to get wet? Join two mermaids (Courtney Ward of Halo Gaia and myself) in a 10-day ocean immersion with the wild dolphins of Southern Mozambique.