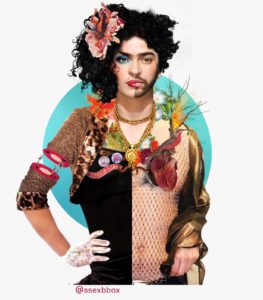 Gender, even though it may seem to be as natural as the air we breathe and the water we swim in, is actually -primarily- a construct, based on much cultural-specific conditioning, training, and expectation.

The gender binary was created to classify humans into one of two categories: man OR woman.  However, history and research both show that there are far more gender identities than just these two.

The term “non-binary” is used to describe people who cannot, according to their self-perception, be defined (or contained) within these socially stereotyped and limited gender identities of man OR woman.

Something that still confuses people is the difference between the terms gender nonconforming and gender non-binary. A woman, cis or trans, and regardless of her affective-sexual orientation (who she has romantic/sexual relations with), may not fit the feminine pattern expected by society. This means that this person has a behavior that is said to be gender non-conforming as opposed to gender non-binary, which does not mean that she does not continue to identify herself as a woman.

Let’s explore more about non-binary and inclusive language that acknowledges those who identify between the gender binary construct.

The importance of neutral and inclusive language

The non-binary identity raises the debate about how a neutral language can be fairer for those who identify themselves between genders.

“It is a question of survival for the rest of humanity to get out of polarity and compulsory cis-heteronormativity, and also to name the more integrated existences, because what has no name does not exist”, says Pri Bertucci, who is a co-creator of neutral language in Brazil, and promotes courses through their company [DIVERSITY BBOX].

“Above all, non-binary is an invitation to see the world in a different way, opening a wider space. We need a more comprehensive language, more specific labels, which allow us to be, express and move forward, instead of go back to narratives of ideological morality,” Pri explains.

Moreover, “a new language can be used to describe a new chapter in human history. A more inclusive chapter for integrating polarities and transitioning to new forms of consciousness. Not only for the respect and visibility for trans people, but for the greater good.”

Neutral Pronouns – They/them/theirs, ze/hir/hirs/ and ze/zir/zirs are some gender-neutral pronouns that can be used as alternatives to he/him/his and she/her/hers. See the chart below to see how to use them.

Allies: People who are not part of the LGBTQIA+ community in terms of their identities yet advocate for LGBTQIA+ rights. An ally believes that LGBTQIA+ people face discrimination and are therefore socially and economically underprivileged/vulnerable. They intend to leverage their position and accompanying privileges as heterosexual and/or cisgender individuals, in a society focused on cis-heteronormativity, to combat homophobia, biphobia and transphobia.

Androgyny: Behavioral expression and traits that are neither, or somewhere in between, what is considered by society as masculine and feminine expressions. In general, an androgynous person wears clothes, hairstyles and accessories which might be considered “unisex” or even gender fluid.

Cisgender: People who do not identify as transgender; that is, those who identify with the sex they were assigned at birth. Cisgender is a term that was coined to differentiate trans and non-trans people.

Dyadic: Simply defined as not intersex. Dyadic people were born with sex traits (body/genitals) that are typically categorized into one of the binary genders (male or female).

Gender binary: Term used to describe the notion that there are only two possible genders — male and female. These classifications are based on someone’s sex assigned at birth and then generate social expectations of male/female gender performance.

Gender identity: The gender a person uses to identify themselves, which may or may not match their sex assigned at birth.

Gender pronoun, or simply “pronoun”: The pronouns that a person uses to match with their gender identity, such as he, she, they, or ze.

Intersex: An umbrella term. Intersex people are born with, or develop in childhood, many possible differences in sex traits outside of what society typically deems to be “male” or “female” (these include genitalia, hormones, internal reproductive anatomy, or chromosomes).

LGBTQIAP+: Acronym used to refer to people who are lesbian, gay, bisexual, transgender, queer, questioning, intersex, asexual, allies, pansexual, and the “+” refers to the many other sexual orientations and gender identities that exist, whether identified and named yet or not.

Nonbinary: A term used to describe people whose gender identity does not land in the binary system of male/female. It’s an umbrella term to describe identities between genders, a combination of genders, gender fluidity, or a personal identity beyond the gender binary. Some terms/orientations that nonbinary people may use to identify themselves include: genderqueer, genderfluid, agender, bigender, pangender, multigender, intergender, among others.

Queer: A term that has a diversity meanings. It once had a pejorative meaning and use, but today has mostly been reclaimed to be used as an adjective, verb (queering), noun (queerness), identity, sexual orientation and gender identity (i.e. gender queer). The term itself opposes the universal assumption of cis-heteronormativity.

Sex Assigned at Birth: A social, legal, and medical designation assigned at birth based on an assessment of sex traits (see below), often performed by a medical professional.

Sex traits: These refer to anything from genitalia, internal reproductive anatomy, chomosomes, and even hormones. It’s important to note that sex traits are separate from gender identity and gender expression.

Transgender: An umbrella term used to describe people who do not identify with the sex they were assigned at birth. This includes trans women, trans men, as well as nonbinary/nonconforming or genderm queer people. “Trans” is the abbreviation that is most frequently used.

Transsexual: A mostly outdated term that is often considered pejorative. Many transgender people do not identify as transsexual and the term should not be used unless specifically requested by a person who identifies as such.

Two-Spirit: An umbrella term created by Indigenous peoples that bridges Indigenous and Western understandings of sexuality and gender. The term often refers to a person found among Indigenous North American cultures  who embodies mixed gender roles. The person expresses themselves and performs functions attributed to both genders, as if two distinct spirits shared the same body. This umbrella pan-Native term can also represent an Indigenous person’s sexuality such that a Two-Spirit person may also happen to identify as gay, lesbian, bisexal, pansexual etc.

(This blog article is adapted from resources written by Pri Bertucci, the Queer Profit and founder of Diversity BBOX consulting)