Death: The Only Certainty!
by Rahasya Advait, guest facilitator at the Shakti Shiva Academy

From the perspective of being alive, the only thing we can know as a certainty is that we will die. By resisting that fact, as individuals, cultures and as humanity, we divert our minds from the Dharma (by which I mean “existence itself as it is” – not the teachings about it). Resistance becomes avoidance, avoidance becomes fear, fear limits our degrees of freedom, limiting our degrees of freedom limits our lives … and death – the ultimate limitation of life was what we were trying to avoid awareness of in the first place! 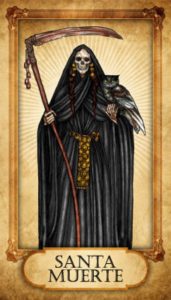 Just as with computers, the GIGO (garbage in, garbage out) syndrome applies. Introducing such a fundamental error into our thinking messes significantly with our thinking processes, conscious and unconscious (though not, fortunately, with our subconscious).  Avoiding the awareness of death multiplies itself as an error in our modeling of our world and our acceptance/awareness of our eternally current reality. We (by which I mean the mind-egos which we are, in fact not) have one power. We can allow the prana/chi/bioelectrical energies to flow or we can restrict, restrain and contain them. This is highly functional if, for example, we see a lion or snake and violently clamp our energies off almost entirely at the root. The body freezes, and the awareness becomes intensely constricted. After the danger has passed and we release the panic-clamp in our consciousness, we are flooded with all the awareness and action-energies which we prevented. We tremble in fear, we gibber in horror. We catch up on all the feelings evoked by the nightmarish projections and horrendous dire predictions our over-stressed minds made while the threat was present.

When death gets to be as big an issue as avoidance of actual impending death, things go bad.

So what next?
Instead of supporting the survival of our body by alerting us of real dangers, our mind starts treating anything even distantly associated with the idea of mortality as a threat.  The error spreads from the root function of survival-maintenance to our next Chakra (the 2nd or Sacral Chakra), which deals in social position and relating. We can then be disproportionately affected by our interactions with others in our culture. More prone to defensive anger when mere ideas, quite harmless in themselves, are being discussed. When the error spreads higher up our Chakra system to the solar plexus, our aesthetic senses get affected. We can end up like Oscar Wilde "Either the drapes go, or I do", reacting to how things look as if they were an existential threat. Hence the usefulness of getting conscious about the fact of your (and everyone's) death.

If you can allow all the feelings which fill the space between you and your acceptance of death to be felt in fullness, optimal functioning can be restored. The ways of managing this are many, and in many spiritual traditions, cleansing the mind of the un-reasoned fear of the inevitable is, quite rightly, a major objective.

One mentor of mine (long before I met him) used to literally bury his students alive for a couple of hours.  Another merely kept a card in the front of his wallet for a few years. It read: If you must think about something, think about your death. Various traditions have used plant poisons, frog and snake venom, long fasting, pain-endurance and a host of other techniques to achieve the same. I encourage you to the journey (of feeling all that needs to be felt and allowing that clamped down, closed energy to flow), and I wish to assure you of the prize! The prize is not freedom from the mind making associations and generating fears … it is freedom from the excessive disproportionate scale and intensity of those fears.

Fear, as such, gets scaled to proportionality, and becomes a more reliable guide.

It also becomes, unless you live in an actual war zone, far, far less.

To accept death is to accept vulnerability, and the capacity for vulnerability is one's capacity for experiencing anything. Celebrate those who have died, meditate on your own death, walk in graveyards . These things can transform, never mind your experience, but even your ability TO experience. We send you love this Scorpio season as you walk with Death, befriending your fears and reclaiming your capacity for life! 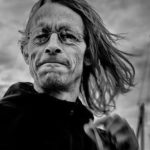 Rahasya Advait is regularly a guest teacher for us at the Shakti Shiva Academy and can often be found importing his unique style of wisdom via Facebook Lives on Fridays. He is based on a hill top called "Little Tibet" a few hours outside of Cape Town, South Africa.  He is the author of The Rocky Horror Tantra book and creator of Death Meditation audio guide.

If you've never attended his classes, here's how one of our students describes his teaching:
"In one of Rahasya's recent online teachings, he spoke of the "Trickster" nature of our mind as it hides what we can see and not see. Rahasya's soft voice invites me to physically lean in, a physical gesture to the effort needed to hear the softness of truth.  He invites us to consider the huge, sometimes "unnerving" revelations that come from looking into our erotic shadow.  Hearing his words, I know it is truth. And yet, looking into his piercing eyes, I feel stripped naked of any pretense and ego protection even across ZOOM! I cannot hide.  And as much as this scares me, I also know the shadow place is where the gold of growth lies. Even this fear.  Do I dare!  Yes! Because I want to live into this life."

And here's how one of our other teachers describes him:
"To talk about Rahasya is like talking about the Mystery…he cannot be described in words! He is an Experience. He is a tan-trikster of the mind. Every time I sit with him in conversation about Truth, I feel he has the ability to re-wire my brain. Engraving new neural pathways in order to understand what until that moment was absolutely not available to my understanding. There are very few teachers teaching like this in the World today. He is a rare gem, buried in the wind. Catch him if you can!"

To learn more about Rahasya, the Shakti Shiva Academy and our online courses, you can join our learning community committed to exploring the intersections of sexuality and spirituality by signing up to our Newsletter here