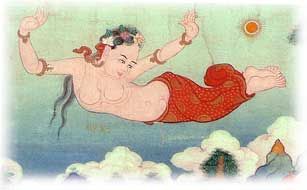 On my VisionQuest many years ago, I had a vision in which an eagle carried me on its back up a high cliff to the entrance of a cave. There was a doormat at the entrance of the cave, and inside lived an old hag. The eagle told me that she would show me how I could fly. I asked the hag and to my surprise, she gave me the doormat and told me that I could fly with it. Before I knew it, the doormat had become my wings and I was flying high up into other dimensions with the eagle.

Upon our return from this magnificent journey, the eagle dropped me at the doorstep of the hag, whom I thanked and returned the doormat to.

I then turned towards the eagle to thank him for such a life-changing experience. I felt liberated and expanded beyond measure. The eagle received my gratitude and proceeded to inform me that it was now my turn to pass on the favour. He pointed out many women sitting outside on the cliff edges and told me it was my task to go help them weave their own wings.

And so, sitting with the women, together we all wove our own wings. Their wings were inspired by the doormat that became my wings, but they were much more beautiful – each set unique to the woman who would fly with them.  Watching those women fly off with their own wings – it brings me to tears when I reflect on that memory today.

This is a challenge and opportunity today, Women. Yes, for the longest time we have been doormats. Our power and magic has been as hidden as the hag in the cave. But it now is time for us to weave our own wings - a sisterhood of Skydancers.

Skydancer is a Tibetan concept referring to the awakened feminine whose sexuality becomes a force of self-realization, not just for herself, but also for the beloved – and for the world, she inhabits and blesses with her presence.

It seems to me that the last 15 years of my life on some level have been about fulfilling my promise to the eagle. I have stepped into the role of that hag and out of my cave to support women in awakening to their true essence.

At this moment in time, as a culmination of that journey, I invite women from across the world to join me for a free call in which I will present you with nine keys to sexual awakening for a women. On this call, I will be introducing my sexual awakening for women training – nine months personal intensive to awaken your feminine sexual essence and a twelve-month facilitators training to share your gifts. My hope and dream is that you too will join me in teaching women who may have been doormats to now weave their own wings - and fly off into the infinite sky. Let's create the world of our heart's longing. Together.